Your credible resource for help with your electrical exams.

If that sounds like you, our Circuits (Elec-A1) help is for you.

About: The Circuits exam is written nationally for electrical aspiring engineers.  The code for this exam is:

The exam tests candidate’s understanding and knowledge of circuits.

Format: 3-hour long, closed book exam. Out of the six questions that are asked in the exam, only five need to be attempted.

Approved aids: Since the course is highly computational, non-programmable Casio or Sharp calculators are permitted.

After reviewing several previous exams, a pattern in the questions emerges.  Here is a summary of the different question types.

The first question tests your knowledge about KCL (Kirchhoff’ current law) and KVL (Kirchhoff’ voltage law), and your concepts about series and parallel circuits. It is a numerical question. You will be asked how, for example, to calculate the value of resistance, current or voltage in the circuit. Your understanding of DC circuit analysis will be tested here. You will have to use both principles described by Kirchhoff: the Current law and the Voltage Law:

The second question is a numerical problem regarding Thevenin Theorem. You will be asked to calculate. The Thevenin Equivalent circuit (Vth and Rth), load impedance RL and maximum power dissipation across RL

Thevenin’s Theorem is a method to simplify a given network to an equivalent circuit composed of a single voltage source, series resistance, and series load.

Question three is regarding AC state analysis. You may be asked about solving the series and parallel RLC and perform AC state analysis and solve a circuit involving three basic passive components: resistors (R), inductors (L), and capacitors (C) which have different phase relationships to each other when connected to a sinusoidal AC supply.

There may also be transients such a switch closing/opening or sources changing value at t=0. In these cases, it will be necessary to find the time constant τ (tau).

Question no. 4: Node and loop analysis

Steps for the Loop Analysis

Question no. 5: Phasors and Impedance

Please remember the following to solve phasor and impedance related questions. This can then be described by using phasors as follows:

This question specifically tests your knowledge for Laplace transform circuit analysis. You will be given the circuit with initial conditions and a transient which will occur at t=0.  You will be asked to draw Laplace equivalent circuit and/or asked to calculate the voltages or currents in the s domainor time domain.

Typically, the last page of your exam will be a helpful appendix that will list useful Laplace transforms required to solve the problem.

Or start with my free Elec-A1 solutions sample 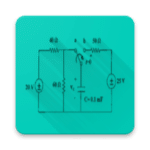